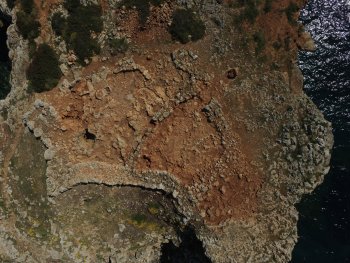 The project “Among Islands” came out in 2010 as a result of the collaboration between a research team from Minorca and another from Majorca. After confirming the lack of information about coastal sites of the Bronze Age in both islands, both teams decided to work together from common goals and sharing the same work methodology in the following sites: sa Ferradura (Porto Cristo, Majorca) and es Coll de Cala Morell (Ciutadella, Minorca).

The main purpose of the project is to go more deeply into the study of this type of prehistoric sites that present very specific features: they are coastal sites protected by a wall and located in places of difficult access. Their function is still unknown since systematic excavations haven’t been developed in these sites.

Besides the scientific mission, a collaboration framework has been created among institutions of the two islands (the town councils of Ciutadella and Manacor as well as the Council of Minorca) and social involvement is being encouraged through the implication of the Friends Association of the Manacor History Museum, the Museum of Ciutadella and the Manacor History Museum, as well as the voluntary workers who collaborate with several campaigns. The archaeologists responsible for the project are Montserrat Anglada, Damià Ramis, Toni Ferrer and Magdalena Salas.

The site of sa Ferradura is located near the village of Porto Cristo, in Manacor. To get there you must head for the area known as sa Carrotja and follow the coast heading for the north, direction of Cala Petita. The UTM coordinates of the site are x: 530120 y: 4377265 and the reference code of the Catalogue of centres of cultural interest of Manacor is 26-128.

The prehistoric site of sa Ferradura takes shape as a coastal cape with access from a natural isthmus that present a great erosion at certain points, which has weakened the calcareous soil. The promontory can be approached through an ascent defended by three stepped wall lines adapted to the topography of the terrain and that make it seem a fortified site. The last wall line closes the access to the upper section of the promontory. The only access is a narrow passage located between the northern side of the said wall and the cliff of the promontory. Two structures can be distinguished in this place. In the same way, on the side of the coast, wall structures with a gigantic face can also be seen.

Cala Morell is a small cove located on the western side of the north coast of the island of Minorca. The entrance to this cove is located on the north-west and it is a relatively safe refuge for small vessels. At the end of the north-east side of the cove, a rocky cape of about 35 metres high rises. Here we can find the archaeological site. The UTM coordinates of the site are x: 575269 y: 4434538 and the reference code of the catalogue is SMN-02.

The archaeological site is protected by several dry stone walls from which it is joined to the land and that were built taking advantage of the natural drop of the terrain. In this area, up to 13 navetes (megalithic prehistoric remains from the Balearic Islands with the shape of an inverted vessel) of 8 metres long by 3 wide in most cases and which are facing south can be seen. They were built by means of double face walls with small and medium-sized stones and, at least in five of them, the eastern wall is visibly made up of the same wall that delimits the area. In the middle of the site there are two depressions of about 8 metres long by 4 wide which were man-made and it is thought they were used as deposits to collect rainwater (Juan & Plantalamor, 1996). At the highest point of the promontory, in the middle of an area of level ground, we can see a visibly circular structure with five big blocks of stones on the northern side. Today this structure is covered by small stones that were probably put there when the stairs to gain access to the site were built in the second half of the 20th Century. 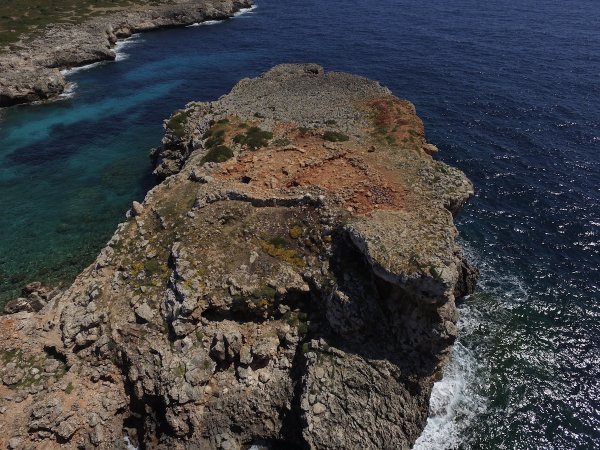 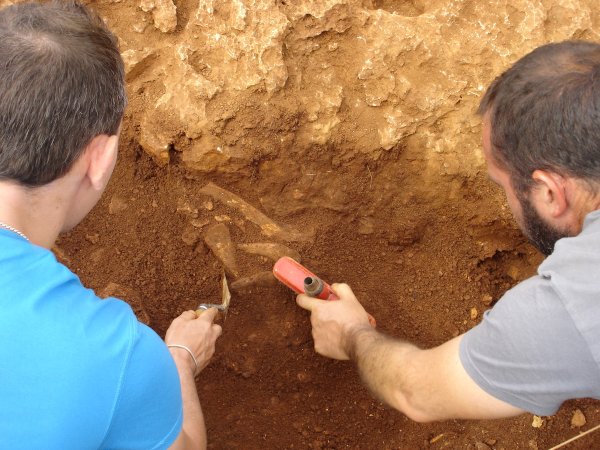 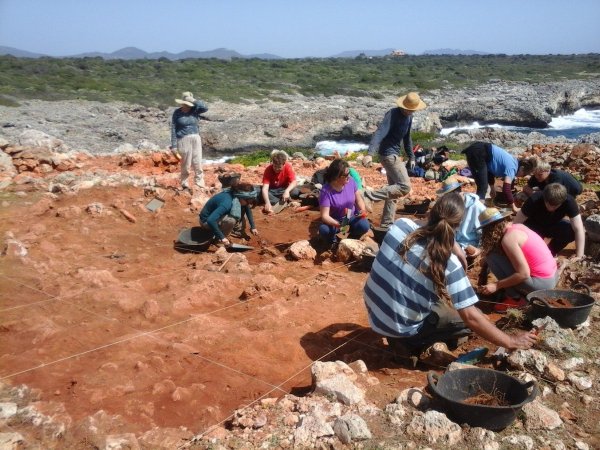 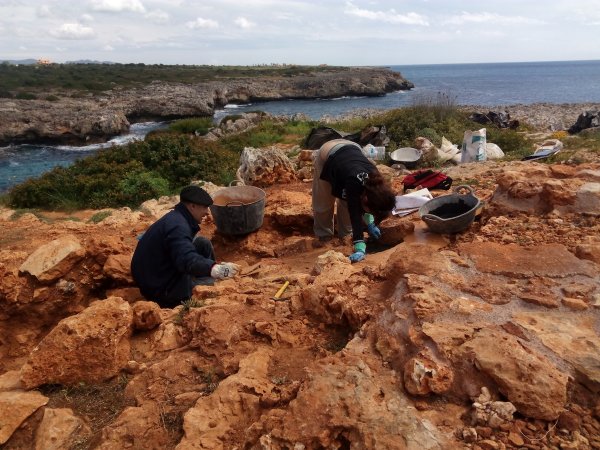 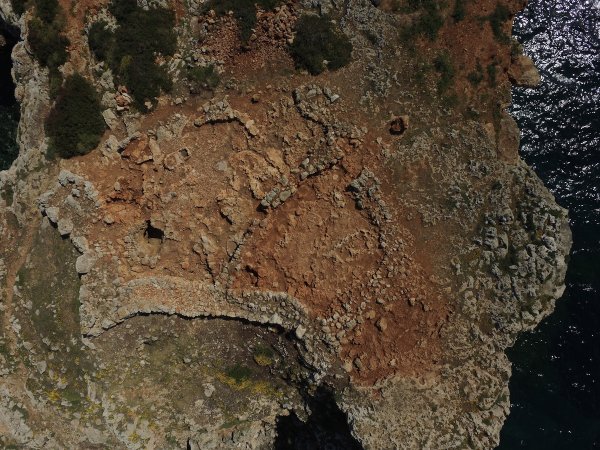 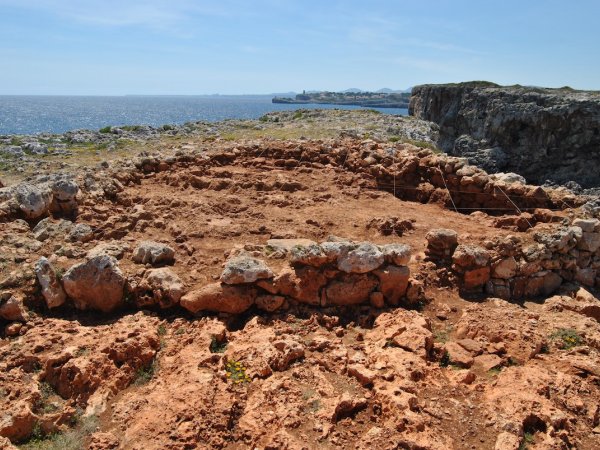 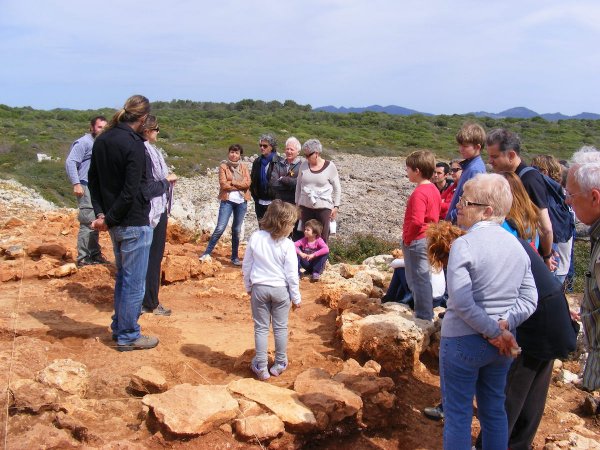 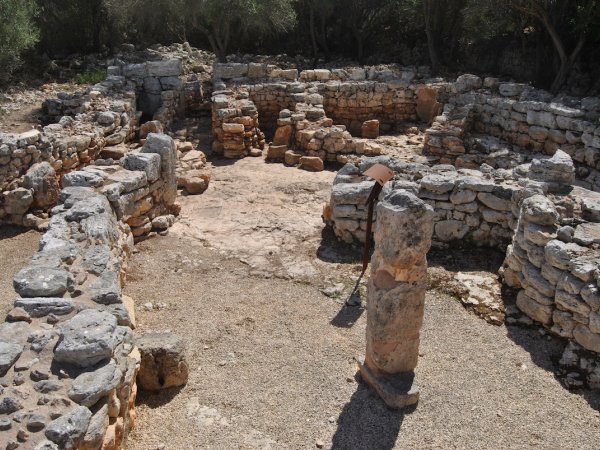