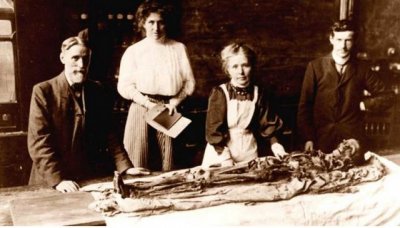 “We cannot interpret the material accumulated over thousands of years affirming that everything is related to male activities.” Margaret Conkey.

The start of the nineteenth century witnessed women beginning to work in the science of archaeology, anthropology and palaeontology. Their research changed how we understand the past. Pioneering women in the field of archaeology included Margaret Murray, Gertrude Bell, Gertrude Caton-Thompson, Dorothy Garrod, Kathleen Kenyon, Honor Frost and Gudrun Corvinus. Dorothy Bate, a trailblazer in zooarchaeology, deserves a special mention for her scientific work. She collaborated with the archaeologist Dorothy Garrod and together they found the fossilised remains of 52 extinct species. In 1897, she became the first woman hired as a scientist by the Natural History Museum in London. Her discoveries include the remains of an extinct species that she called Myotragus balearicus.

This is the largest mammal on the islands and its name, stemming from Greek, means “mouse-goat”. This mammal is believed to have arrived on Mallorca when the islands were still joined to the continental shelf over five million years ago.

Once our islands separated from the Continent, the ancestors of the Myotragus became isolated and as there were no major predators to threaten them, they began to evolve differently.

In this workshop, we will travel with Dorothy Bate to the remotest prehistory of our islands to discover what the wildlife and their environment were like millions of years ago. We will become true researchers of the past to learn about the Myotragus balearicus together and solve the unknowns about these now extinct animals.